Skip to content
Advertising / Behind the Scenes / Corporate / Portraits

On the first work day of this year I received a call from long time client and friend, Marion Rector of the agency that bears her name, Rector Communications. Marion and her team had assembled “go by’s” or layouts for her 25th annual report for Quaker Houghton (formerly Quaker Chemical), a global chemical company founded and still headquartered in Conshohocken, PA. I have been honored to work with Rector on this project for the past 6 years, and proud to know that every single one of the corporate annual reports they have produced for Quaker Houghton has won awards.

The 2020 annual would consist of two on location images, a series of environmental portraits of employees from around the world, and be supplemented with imagery I had produced in the past. Each subject would also need to be photographed with and without masks, a new directive due to COVID-19.

The 2020 cover go-by was a Quaker Houghton employee working in front of a chemical plant. Due to logistical constraints and restrictions from the pandemic, and after an extensive virtual scout of the regions industrial site options, it was decided to composite the worker and background. We decided to photograph the worker in the parking lot of Quaker Houghton at dusk and lit it to match the eventual composite. Justin Chiu was my digital tech, assistant, and retoucher and helped to plan out the shot, and ultimately composite an “industrial” background with the subject. 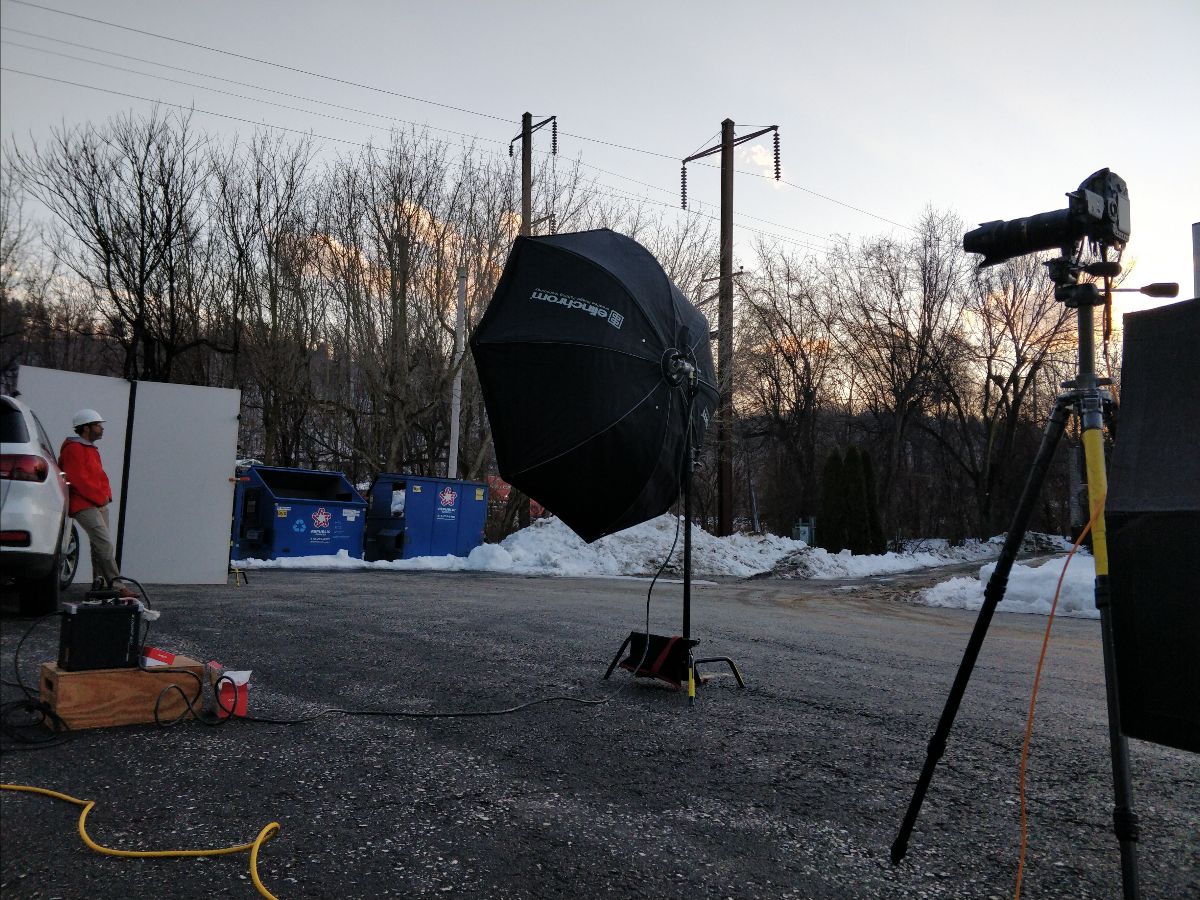 We used a color meter to balance our main light with the existing and rapidly changing color temperature of the open sky and setting sun, and then added a rim light both to give an extra bit of separation between subject and background, as well as add some environmental light that might exist around an industrial site. We also hid a tiny LED on the laptop screen to mimic and control the amount of glow from the laptop. All subjects in the photos are actual Quaker Houghton employees / scientists.

Our second location image required us to shoot two options each with a different subject and location. We followed our COVID-19 mitigation procedures and protocols that we had assembled early on in the pandemic. Since our creative director had concerns about being in enclosed lab spaces with several people, and our art director was not on location to limit our numbers, we remotely shared our live tethered screen. Our creative director was able to watch and art direct from a separate building (on site), while our art director was completely off-site and able to provide live feedback. Good to be prepared!

We didn’t have time allotted to scout far ahead of time, so we quickly surveyed the labs for areas that might work. Our experience and ability to visualize the photos helped narrow down our choices along with guidance from our remote art directors. We took some quick phone snaps to plan for the eventual shots.

In this unique time, Quaker Houghton wanted to recognize the employees who rarely have the spotlight, the people who show up day in and day out no matter the circumstances – not even a global pandemic stops these every day heroes. Management from around the world put forward the candidates that best exemplified this courage and dedication and in the end, 20 subjects were chosen from 12 countries as well as four states within the US. As there was certainly no traveling to capture these environmental portraits, we had to come up with a way to photograph remotely. After being unhappy with their preliminary research for a solution, Rector Communications turned to us for a solution. We wanted to produce high-quality “selfies” with a bit of nuance, adding a personal, human touch to each individual portrait and portraying the ongoing state of a remote world.

Justin and I researched and tested multiple available options: everything from virtual video capture to online meeting software to remote access software. In the end, we decided upon using each subject’s actual phone cameras and three different remote capture methods due to the variety of restrictions based on phone types and country firewall / internet regulations (we used CLOS and FaceTime for iPhones, and Shutter Studio for Android phones).

We sent out sets of directions and guidelines for each subject depending on their location and technology. Then, at an agreed upon time, I would remote in and take over their phones. With the subject walking me through their location, I would briefly scout the area. After narrowing down the options, I was able to direct the subject to adjust angles and positioning, while I controlled their phone camera shutter and settings from my computer or tablet! All images then automatically backed up to the cloud where I could review them.

Some of our bigger challenges were language (as I only speak English), shooting at night due to availability of subject, and poor Wi-Fi. Whenever possible, I would shoot raw to their phones which would then upload automatically to the cloud. While we attempted to use the higher quality back camera when possible, I was sometimes forced to use their front facing camera so I could more easily mime what I was looking for (since they could see me on their screen). With only 30 minutes allotted to connect, troubleshoot issues, scout, and photograph each subject, the photo sessions flew by. It was a surreal experience to be transported from the labs in Italy, to the streets of Shanghai, and then to the sweltering temperatures of Jarkarta, knowing I had just shoveled snow prior to the calls.

In such a strange year, it was comforting to know that despite not speaking the same language, we were able to communicate and connect. On more than one occasion I was called a “beautiful human being.” At one point, I was miming with a plant worker and despite not knowing each other’s languages, we were able to make each other laugh and genuinely share a moment. Some subjects were generous enough to leave their phones connected for hours as their weak signal or slow internet speeds uploaded the images.

In the end, the annual was a total success with accolades coming from Quaker Houghton’s president Michael Barry, our direct clients, the agency, and the subjects.

Philadelphia Photographer Dave Moser is a commercial and editorial photographer who specializes in advertising, portrait, and corporate photography. To see more of Dave's work, visit davemoser.com.

View all posts by Dave Moser →

…and now for something different: Rugby

A Pandemic Approach to Corporate Photography for a Global Annual Report

Reflections on this Surreal Spring

University of Pennsylvania: The College of Arts & Sciences

We "visited" 12 countries and 20 locations to phot

SWIPE to see some options we had plus the finalize

SWIPE to see the shot straight out of camera as we